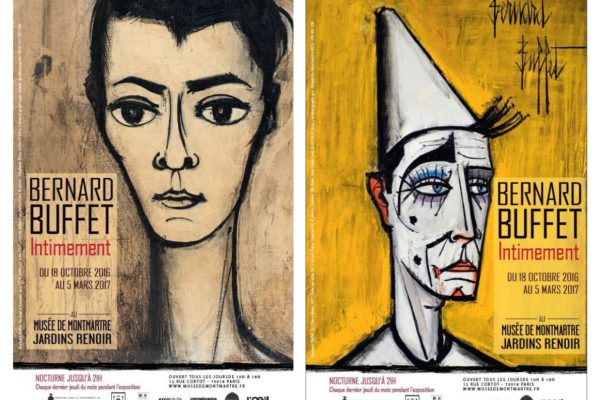 This exhibition, assisted by art historians Sylvie Buisson, Yann le Pichon and Saskia Ooms, conservation manager, evokes the connection that Bernard Buffet had with Montmartre. First in Batignolles, where he was born in 1928 and lived out his childhood years, then on the hill itself where he had a house, number 20 rue Cortot, located not far from the Musée de Montmartre and the studios of Lacourière and Frélaut, where he produced his most severe prints, until his death in 1999. His childhood playground, high above Paris and near the Sacré-Coeur, would give him the force to continue his desperate fight against the inevitability of old age. He drew from it new inspiration in the image of his icons.
Thanks to the friendship between the painter and his historian, Yann le Pichon, author of three volumes on the life and work of this artist, the exhibition traces a psychological portrait of Bernard Buffet, his soul viewed through documentation and reflected around the aesthetic discourse of the artist and his profound view on the world. The exhibition is not a traditional retrospective, but a freer tentative at understanding his fiercely autobiographic creativity, including a pertinent choice of striking photographs and emotional souvenirs of his genius. Around 100 works (paintings, drawings, prints and publications) as well as photographs tracing the life of Bernard Buffet will be presented at the Musée de Montmartre. The thematic approach emphasizes the graphic style that characterises Bernard Buffet and his passion for Paris, its environs and Montmartre.

From January 1st, 2017, you can visit the Musée de Montmartre for free with your Paris Museum Pass.

Make sure to copy Registration number after successful submission.

Thank you for payment.

Your ticket for the: Bernard Buffet, Intimement

USD
We use cookies to ensure that we give you the best experience on our website. If you continue to use this site we will assume that you are happy with it. Ok